The City of Versailles under Louis XIV (1682–1715): Zones of privacy under­pinning social, political, and devotional aspects of power

The Palace of Versailles and Louis XIV go hand in hand with the idea of absolutism. The early modern belief in the “divine power of kings” is often invoked as an explanation for how monarchs like him managed to centralize the rule of geographically distant and culturally diverse regions. Our research investigates whether this assumption is sound.

By focusing on the history of privacy in the town of Versailles from 1682 to 1715, our case team investigates concrete, localized mechanisms that allowed Louis XIV to publicly perform the idea of centralized power so successfully that he came to be known as the Sun-King.

Sources
For this, we look closely at historical documents that originated in Versailles during this period. Architectural drawings of the palace, for example, allow us a glimpse at the structural organization of the court’s movement in space. Published theological treatises on devotional introspection can inform us about how secular and religious interests came together in the intellectual landscape of the time. Letters and diaries about devotional practices can serve as a point of comparison between idealized religious ideals on the one hand, and the day-to-day practice of religious belief, on the other. And of course, police files provide us with clues about which crimes were also considered sins, and thus worthy of stricter scrutiny.

Fruitful Fieldtrips
In January 2019, under the guidance of Mathieu da Vinha from the Centre de Recherche du Chateau de Versailles (CRCV), our research team had the privilege of an exclusive visit to the Palace of Versailles. We learned about the layered history of its architecture, the social dynamics of the space, and even entered rooms that are normally closed to the public. Our collaboration with the CRCV will continue throughout 2019, with a joint research symposium planned for later in the year, as well as research publications.

During the same research trip, our team also had a workshop about legal mechanisms for the protection of bodily integrity in ancient law, with professor of Legal History Philippe Cocatre-Zilgien, from the Université Paris II Panthéon-Assas. This workshop opened our eyes for the long history of what today we call privacy, and for the many other possible names this concept might have received in historical documents through the ages. 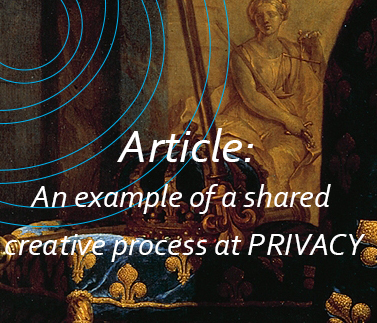