Kierkegaard – The Individual in Global Society

This course will be taught twice this summer. We will have an online summer course but will also complete a course with on campus teaching if the COVID-19 situation allow us to do so. The deadline has been extended to 17 June

7 July to 30 July 2021 Course syllabus and programme
Due to the COVID-19 situation the course will be taught in a digital format.
Credits: 15 ECTS 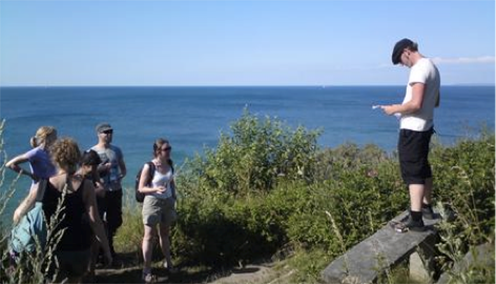 Once again, the Faculty of Theology and the Søren Kierkegaard Research Centre are pleased to offer a course on the thought of Søren Kierkegaard in his hometown and at his own university. In this concentrated summer course, you will study alongside students from Denmark as well as countries throughout the world.

The summer course is a study of the works of Copenhagen’s most radical author, the “father of existentialism,” Søren Kierkegaard (1813-1855). Kierkegaard’s entire authorship is centered around the existential project that every human being is confronted with: to become oneself and none other than oneself. And as he sees it, becoming oneself does not happen passively and is never achieved once and for all, but requires constant effort. He thus often describes this project as one of taking responsibility for “choosing,” “gaining,” or “becoming oneself.”

This course examines his witty, humorous, but also deeply earnest exploration of the psychology of self identity. Kierkegaard’s thoughts about the struggle for personhood take us through perhaps unexpected territories: beginning with the breakdown of culture-specific ethnic and religious that have traditionally defined the self, he explores the culturally destructive power of Socrates’ irony, the art of seduction, theories of beauty and boredom, a scathing critique of religious culture and politics, religious demands that conflict with ethical duty, the joy of being embodied here and now, and finally, love.

We will remain especially attentive to the ways in which Kierkegaard’s thought is critical of inherited ethnic and cultural definitions of self, and why he nonetheless considers human relationships to be absolutely essential to understanding oneself and one’s obligations to other human beings.

Toward the beginning of the course, students will enjoy a subsidized weekend study tour to the northern part of the island of Sjælland, where we will visit Hillerød, Gribskov forest, Gilleleje, and Helsingør to see some of the sites that Kierkegaard incorporates into his literary production.

You may choose either a bike trip or an excursion on foot. We will read relevant passages from Kierkegaard’s works at the various sites.

In general, class will take the form of a lecture followed by a dialogue between instructor and the students. Readings will be assigned for each class and the discussions will focus on these readings. Instruction will be in English, and we will refer to English translations of Kierkegaard during class, but you are welcome to read and consult translations in your native language.

Who can benefit from this course?

This course is open to third or fourth year undergraduate students as well as first year graduate students. You must have completed 120 ECTS points before the summer course begins. The course aims at students interested in philosophy, theology, literature and social sciences, though all disciplines are welcome; a background in philosophy is not required.

The assessment is based on two parts:

Application deadlines are 1 April and 1 June 2021. The deadline has been extended to 17 June
Read about application, tuition fees and accommodation here.

Application deadlines are 1 April and 1 June