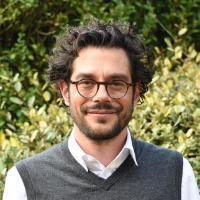 Jan Loop is Professor of Early Modern History and Religious Cultures at the Faculty of Theology, University of Copenhagen. He is also a Senior Research Fellow at New York University Abu Dhabi and a PI in the ERC Synergy Project 'The European Qur'an. Islamic Scripture in European Religion and Culture'.

His teaching and research interests are in the intellectual, religious and cultural history of Europe and the Near East, with a special focus on Western knowledge of the Arab, Ottoman and Persian world between 1450 – 1800. His first book, Auslegungskulturen (2003), is a comparative study of Christian and Islamic hermeneutic concepts in early modern times. His second book, a monograph on the Reformed Church historian and orientalist Johann Heinrich Hottinger (1620-1667) and the significance of Arabic and Islamic Studies in the 17th century, appeared in 2013 in the Oxford-Warburg series.

Together with colleagues at the Universities of Madrid, Nantes and Naples, Jan is leading the ERC Synergy Project 'The European Qur'an'. The project is funded with €10m over six years (2019-2025). It’s aim is to study the place of the Muslim holy book in European cultural and religious history (c.1150-1850) and to describe how the Qur’an is interpreted, adapted, used, and formed in Christian European contexts – often in close interaction with the Islamic world.
At NYU AD Jan has been involved in developing the research initiative “Recognizing Religions. The Cultural Dynamics of Religious Encounters and Interactions in Historical Perspective”, which starts with an online seminar series in the autumn 2020.

Jan Loop is the general editor of Brill's series 'History of Oriental Studies'. Together with Alastair Hamilton and Charles Burnett he published, in this series, a paper collection on 'The Teaching and Learning of Arabic in Early Modern Europe' (Brill, 2017). In 2018 he edited a special issue of the Journal of Qur’anic Studies on 'The Qur’an in Europe'.